Charlie Laurenson met her boyfriend in 2015 during her freshman year of high school. They were inseparable and grew to love and care for each other deeply. Little did they know, one of the greatest tests of their relationship awaited them only a few years later.

During their senior year, Laurenson’s boyfriend, Malaeti'a Misa, had decided that  he wanted to join the military upon graduation. “It was really hard at first,” said Laurenson. “It was something I knew I had to support but of course, I had my own feelings about it. 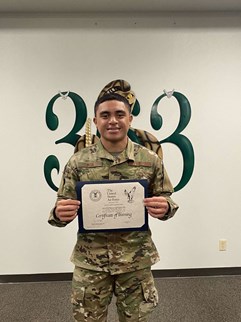 I knew I wanted him in my life and I was going to do everything to support his decision. I had to recognize that yes, it is hard for me, but it is hard for him too. He’s not just leaving me but his parents, his friends, his family, his entire life.” After a year of making the decision, Misa left for Basic Military Training and Laurenson launched her career. “I think in a relationship there needs to be a level of selfishness so that you don’t have an imbalance that can lead to resentment over time. His decision to join the military made me think about my own identity and what I wanted. It inspired me to join the tech industry and build my own career.”

Upon graduating high school, Laurenson interned at Salesforce as part of a workforce development program called Year Up. While it was exciting to be building her future, it was incredibly difficult being apart during Misa’s first year. “It was hard. We only were able to speak to each other once a week for two minutes. We ended up writing letters to each other which was actually really nice. [That’s not something people do anymore thanks to technology.] We both knew we had our own individual goals to focus on while knowing we were supporting one another in them.”

Today, Misa has been assigned to a base in Alaska known as JBER (Joint Base Elmendorf-Richardson) while Charlie lives in California. “He has one year left until he gets transferred again to a place that is as of now, unknown.” Laurenson has been fortunate to have worked at Salesforce and now Calendly where her team and company culture are incredibly supportive of her relationship. “Calendly’s remote first model and supportive team culture allows me to continue building my career while maintaining my personal relationship that has its unique elements. It has been great to have the support of people I work with who know that I may have to step away at times because I’m expecting a phone call from him and I can’t miss it. I’ve also been able to use Calendly’s travel perks to visit him too.”

When asked what Laurenson wants people to know about people like herself who are in relationships with active military members and or veterans, she had this to share.  “I wasn’t a part of a group, or knew many people who have partners, spouses, etc. that are in the military, so I didn't really have many people to turn to, and seek advice from. I want to be that person for others. A resource, a friend, or support system to anyone who is going through a similar situation. 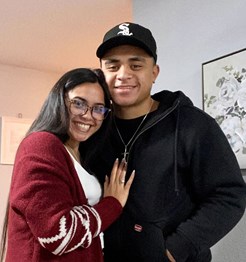 I love sharing my personal stories to help inspire others, while also letting them know that they are never alone. [This life is] not easy. But you can get through it. There is no blueprint or how- to- book on how to live this lifestyle with the person you love. It's made our relationship stronger and we constantly ask ‘how can we show up for ourselves?’ and ‘how can we show up for each other?’. Despite all the challenges we face, there are so many great things that come with this lifestyle, like having the opportunity to explore the world, meeting new people who become a second family and more. No, it certainly hasn’t been and is not easy, but for me it has been worth it and I wouldn’t change a thing.”

On behalf of Calendly and in honor of Veterans Day, we thank A1C Malaeti'a Misa for his service and for Charlie Laurenson for sharing her story.

Want to join our team at Calendly?

We’re hiring! Check out our careers page for current opportunities.

Find a career for you

We offer the opportunity for talented individuals to do the best work of their lives.